This year is the 100 year anniversary of the opening of the Cabaret Voltaire. Discover Zurich and the celebration of the Dada Movement with Inspires by Avis

On February 5, the good people of Zurich will turn their attention to a special birthday: 100 years since the opening of the Cabaret Voltaire and of the birth of the Dada movement. It must have been a strange evening, back in 1916, when a ragbag of young foreign artists, dreamers, poets and rebels living in exile launched an artistic attach on the war, society and on art itself. Over the following weeks they performed nonsense verse, puppet shows, meaningless musical non-works, manifesto readings and showed off experimental art pieces. 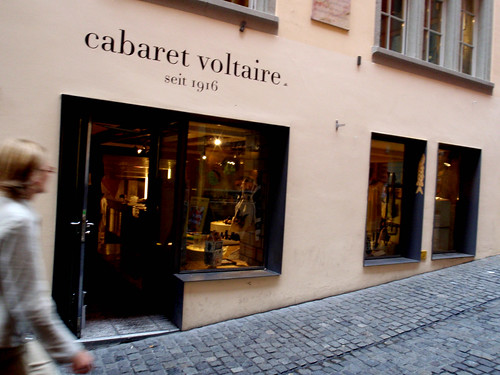 What, you have to wonder, would modern Zurich – with its banks, black BMWs, lofty technology institute and sublimely ordered lifestyle – make of Dada now? They’d probably call the Dada troupe “creatives”,  and attempt to absorb them into some insidious mainstream. But the young men and women who gathered around Dada principal, the German poet and author Hugo Ball, were not sure what they were doing, nor why – and that was the whole point.

Tristan Tzara, from Romania, was a poet, performance artist and art critic. Francis Picabia was a French avant-garde painter and typographer. German-French Hans Arp was a sculptor and abstract artist. Emmy Hennings, Ball’s partner, was the only Swiss member of the clan and could write, dance, sing and act. Richard Huelsenbeck was a German psychoanalyst – and drummer! There were others, hovering round the fringes of what was in any case a very fringe outfit.

Dozens of exhibitions, debates and performances are planned to mark the Dada centenary during 2016 – and for visitors to Zurich it provides a sort of palimpsest or hidden map for planning a route around the contemporary city.

Many art-themed sights are found around the Altstadt or old town of Zurich, an area of pedestrianized streets, cosy cafés and bars and vintage shops, watched over by the twin towers of the Grossmünster church. An obligatory stop is the Kunsthaus, the city’s modern art gallery; as well as an excellent permanent collection of modern masterpieces by the likes of Picasso and Munch, it will host a dedicated Dada-themed show throughout spring and summer.

The Café Odeon, close to the river, opened in 1911 and still has much of its original art nouveau décor. Hans Arp had coffees here with his Swiss girlfriend, dancer and teacher Sophie Taeuber. James Joyce was a regular. Political clients included Lenin and Trotsky and, later, Benito Mussolini.

The south side is the CBD these days, but the Dadaists, after launching at the Cabaret Voltaire, also did their thing in the posh Confiserie Sprüngli confectioners and in the opulent Zunfthaus zur Waag (guildhall of the linen weavers). There are several such guildhalls in the city; founded from the 14th century onwards, they are the historic seats of Zurich’s mercantile power.

It’s a short walk from here to the lake, Zurichsee, an ideal place for a beer or a bratwurst and bread roll while watching the shimmering water.

Hop on tram no 13 from Paradeplatz for the 12-minute ride to Quellenstrasse in buzzy west Zurich and then walk over to Im Viadukt, a hip retail space spread across 36 arches beneath an old railway viaduct. Eating, drinking and partying takes place around the shabby chic venues of Frau Gerolds Garden; close by are the Freitag flagship store – housed in a structured made from shipping containers – and the Prime Tower, Switzerland’s tallest building.

For another fix of art, it’s ten minutes’ walk to the Kunsthalle, one of the city’s most ambitious contemporary art spaces. Up to ten individual or group shows are hosted every year, with the emphasis on current affairs and young, daring artists from around the globe.

As dusk falls, many find an evening’s respite in west Zurich by popping over to the Steinfels microbrewery for a taste of the earthy ales made on site. For an informal dinner nearby, Les Halles, a self-styled, garage-like “trash brasserie”, serves excellent mussels and steak frites and the usual accompaniments.The interior is a lively mess of bric a brac, bikes for sale and general clutter.

There are plenty of places to dance and drink around west Zurich but to wind up the night in 1916 style, you should go back to the old town – but hop off the tram early at the main railway station (one of the busiest in Europe) so you can gawp at its cavernous concourse and walk along the Limmat river. The newly opened Marktgasse hotel offers expertly mixed cocktails in its small, dimly lit Baltho bar just right off the lobby – a building has stood on this site since the 13th century and a tactful, costly refurb has protected the character without skimping on contemporary comforts and style.

TS Eliot’s “In my end is my beginning” is a famous Modernist motto. The final destination of this pilgrimage is, of course, the Cabaret Voltaire, where it all began. By day, the place has a small, instructive exhibition and a little souvenir shop. After dark it’s a cool bar to kick back in over a short or a glass of wine. The front room is cosy and clamorous; in the back is the area where the Dada performances took place, and graffiti and posters commemorate those momentous and heady days of arty revolution. For those who are taking on the role of Dadaist, their last drink of the night would be a small Dada absinthe, slowly sipped with a notepaper to hand – recording an inspiring poem, which they then must cut up, read once and finally scatter on the floor.