9 Things Not To Miss While You’re in LA

Discover 9 of the best things about Los Angeles. People say this city has no heart, but the key to enjoying the City of the Angels is knowing where to go.

Los Angeles … the home of the silver screen. It’s a city often shunned by holiday-makers, who say it has no heart. And it’s true, the sprawling Metropolis is completely different from any other American city, but the key to enjoying the City of the Angels is knowing where to go.

The walls of the infamous celebrity haunt on Sunset Boulevard know more secrets than anyone else in Hollywood. Make sure your stay in Los Angeles includes a visit to the 5-star hotel and restaurant. The food is incredible, and dinner comes with the possibility to celeb-spot over your starters. Finish dinner with cocktails in Bar Marmont. Just remember, no photos can be taken anywhere in the building.

Los Angeles is home to some of the most exclusive and luxurious neighbourhoods in the world. And in those neighbourhoods are extravagant estates, which are home to some of the biggest names in the movie industry. If you fancy a nosey at those houses, you can either join an official tour, or buy a map of celebrity houses, and drive around the Hollywood Hills, Studio City and Beverley Hills yourself. 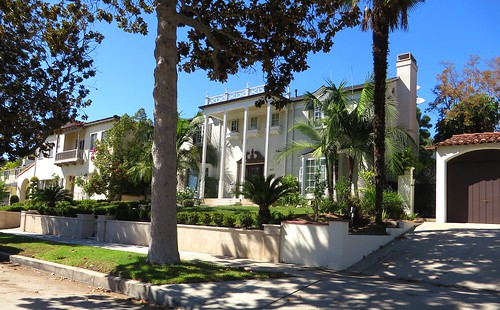 No trip to Los Angeles would be complete without a walk along the Hollywood Walk of Fame. Over 2500 stars are embedded in the sidewalks along fifteen blocks of Hollywood Boulevard and three of Vine Street. The coral pink terrazzo and brass stars are permanent monuments to the achievements of actors, musicians, directors, producers and fictional characters. Each star is decorated with one of five emblems, to denote the honoree’s area of excellence. There is a classic film camera, representing motion pictures, a TV receiver to denote broadcast television, a record to represent the music industry, a radio microphone for broadcast radio, and the comedy and tragedy masks to denote excellence in theatre.

The ‘Four Ladies of Hollywood’ gazebo stands at the western border of the Walk of Fame. One popular section of the walk passes by the Grauman’s Chinese Theatre, a cinema palace often used for film premieres, which is decorated with the hand and footprints of a number of famous actors. If you do head to the Chinese Theatre, be prepared to see some very ropey Hollywood lookalikes willing to have their photo taken for a few dollars!

Located in Burbank, the Warner Bros. Studios are open seven days a week, with the exception of Christmas Day. Tours cost $62 and depart every day at 10am, visiting the studio’s iconic back lots, and the soundstages of some of TV’s hottest shows. Remember to take a photo beneath the iconic Warner Brothers water tower. 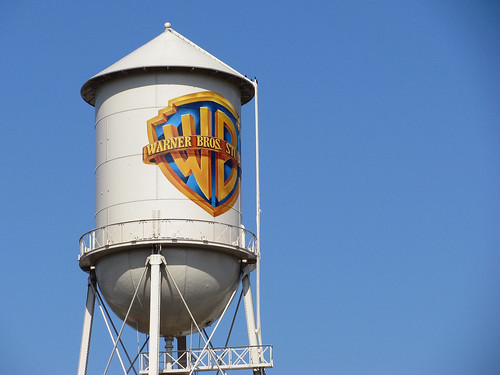 For a different studio experience, head to Universal Studios, a unique style of theme park. Enjoy a selection of rides that take you right into the heart of the movies you love. Join the Minions on ‘Despicable Me, Minion Mayhem’, or explore ‘The Wizarding World of Harry Potter’, exploring Hogwarts castle and visiting the shops of Hogsmeade. Theme Park tickets start at $80. 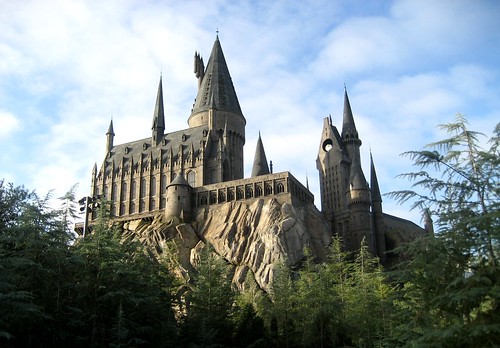 Situated on Mount Lee, in the Santa Monica Mountains, 25 minutes drive outside of LA via the US-101, the iconic Hollywood letters stand 14-metres high.  Created in 1923, it originally said ‘Hollywoodland’ and was an advert for a local real estate development. It was only intended to last a year and a half, but after the rise of the Golden Age of Hollywood, the sign became an internationally recognized symbol and was left there.

If you’re a keen hiker, the western frontier of Griffith Park offers close up views of the Sign. On the longest hike (around 2 and a half hours round-trip) you can ascend above and behind the letters. 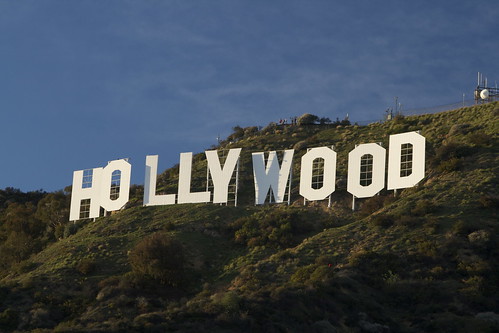 Opened in 1909, Santa Monica Pier has been a landmark for over 100 years. The pier is the site of Pacific Park, a traditional family amusement park with a one of a kind solar-powered Ferris wheel. The pier is also home to the Santa Monica Aquarium and is (ironically) also a favourite spot for fishermen. Entertainers perform daily along the pier. Films which have prominently used the Santa Monica Pier include Titanic, Forest Gump, Falling Down, and Hancock. 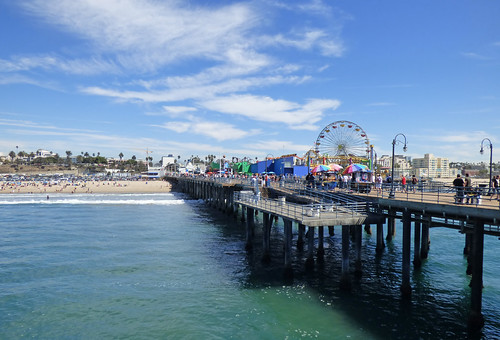 If you’re a fan of people watching, don’t miss out on a trip to Venice Beach. Stretching one and a half miles along the Pacific Coast, it’s not the manicured sands of Venice Beach which are unique, rather its boardwalk, and the people it attracts. Hundreds of street vendors and performers can be found on the west side of the boardwalk every day. From break dancing to broken glass walking, Venice Beach has it all. The area is also an arts and craft market, with paintings, photos and sculptures all for sale. Get a henna tattoo, have your fortune read, or get your name written onto a grain of rice. The boardwalk offers something for everyone.

The walkway has a bike path and skateboard ramps. The area is also famous for ‘muscle beach’. Arnold Schwarzenegger worked out there back in the eighties, and you can still spot body builders working out there today. 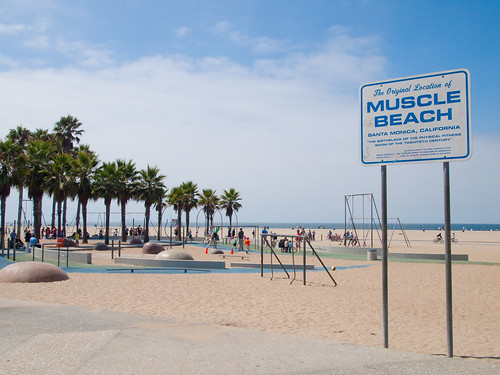 “Muscle Beach” (CC BY 2.0) by  tylerkaraszewski

Whatever you do, don’t miss out on the opportunity to cruise along Mulholland. The road has been the site of classic make outs, Hollywood chase scenes, and silver screen murders. You can easily drive it in its entirety in less than an hour, making time to stop at the various lookout points along the way. The road has incredible views of both the city and the distant Hollywood sign, so make sure you bring a camera. If you have the choice, try to head west along the road, as most of the overlooks are on the Valley side. If you’re coming from the Valley, travel south on Cahuenga Boulevard West, turn right, and then make a quick left up to climb up Mulholland. 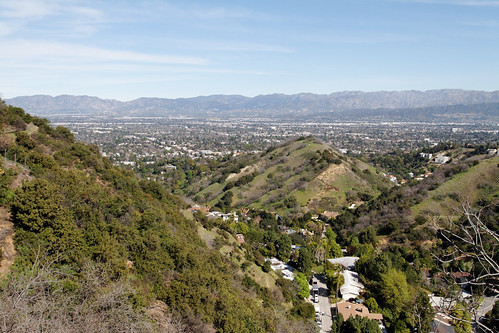