Florence is famous throughout the world for its art, its people, its history and the magical atmosphere that every visitor is welcomed with. Crossed by the Arno River, the city is located in a stunning setting at the centre of a natural basin surrounded by gentle hills. Its historic centre contains important monuments and it has been recognised as a World Heritage Site by UNESCO since 1982.

A short trip can provide an initial impression of the city, but to fully appreciate the area it is recommended to take you Avis car rental into the countryside surrounding Florence.

Popular Avis Rental Stations in Florence
Below, are links to popular Avis rental locations throughout Florence. We have listed the most searched locations for you convenience. Follow the links for more information about each location, including directions, map, opening times and contact information. 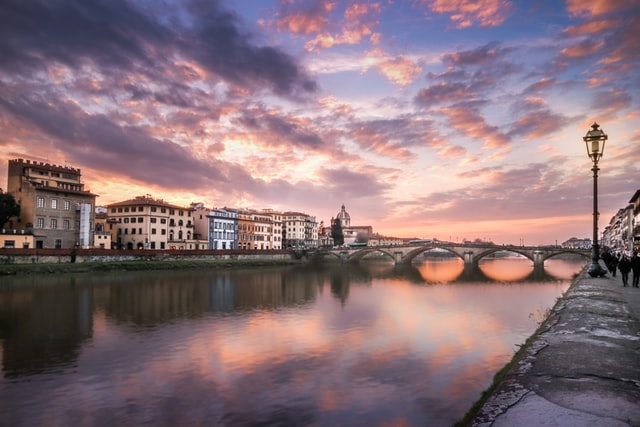 Getting to, from and around Florence

Florence is indisputably the most famous Tuscan city in the world. Every year millions of people arrive in the "cradle of the Renaissance", visit the museums of the city, stroll through its streets admiring monuments, churches, palaces and places of interest.

Driving around Tuscany is a perfect way to savour the atmosphere of a unique land, with a strong identity, which attracts tourists from all over the world.

The best way to get around by car is to avoid highways, but enjoy the scenery on country and provincial roads. The main ones are the FI-PI-LI (which connects Florence, Pisa, Livorno), the SS2 (road with 2 lanes) and the Florence-Siena (road with 4 lanes, which continues even after Siena).

The timetable is susceptible to extensive changes in some periods of the year. Our office and the adjacent garage in which to park our cars are located in Via Borgognissanti 96, outside the restricted traffic area. Our customers can return the car without entering the ZTL from three different directions:

In the Santa Maria Novella district, don’t miss the church with the same name: started in 1246 for the monks of the Dominican order, it was finished in 1360. The Roman-Gothic façade in white and green marble is the work of Leon Battista Alberti. Inside are splendid masterpieces by Masaccio, Filippino Lippi and Ghirlandaio, Giotto’s crucifix and Brunelleschi’s wooden crucifix.

The religious centre is the Cathedral of Santa Maria del Fiore, built in a gothic style on a design by Arnolfo di Cambio over the ancient basilica Santa Reparata. Brunelleschi enriched the cathedral with its elegant cupola, which is entirely covered with frescoes on the inside and is one of the city’s famous symbols. On the right side of the Cathedral, the square bell tower designed by Giotto is covered white green and red marble.

In front of the Cathedral, the Baptistery of St. John (1128) is a masterpiece of Florentine Romanic style covered in white and green marble with splendid bronze doors by Andrea Pisano and Lorenzo Ghiberti. Another outstanding church in Florence is Santa Croce by Arnolfo di Cambio, which is famous for its frescoes by Giotto and the tombs of many illustrious Italians.

Piazza della Signoria has been the centre of civil and political life since medieval times: this vast and solemn square is dominated by Palazzo Vecchio with a monumental statue of Michelangelo’s David in front of it. Palazzo Vecchio was originally known as Palazzo dei Priori, and in the fifteenth century it became Palazzo della Signoria. Later it became the Medici family home and during the time that Florence was the capital of Italy, at the beginning of Italian unification, it hosted the parliament. Since 1872 it has been the municipal building.