Hiring a car in Edinburgh

You’re busy and Edinburgh is a large city, so we’ve made car hire effortless. Collect your rental from  Edinburgh Airport or Edinburgh city centre. With an Avis hire car, you can make the most of your time in Edinburgh and explore at your own pace.

Edinburgh, Scotland’s capital city and gateway to the countryside, Lothian coastline and its surrounding areas is bursting with attractions. Whatever you’re interested in, it’s on offer in or around Edinburgh; historical sights, culture, great food, beautiful landscapes and sports. 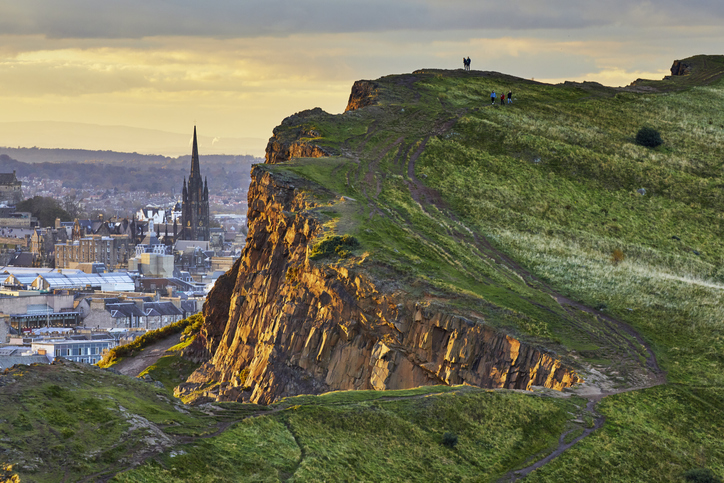 Plan your trip to Edinburgh

Edinburgh is a compact and energetic city, full of fascinating museums and galleries, historical sites and cultural attractions.

Begin by exploring the Old Town area. A warren of cobbled streets and alleys, it’s where you'll find The Royal Mile, St Giles' Cathedral , the old and new Scottish parliament buildings and the Royal Palace of Holyrood. Feeling energetic? Go higher and tramp up the 250-metre-high Arthur’s Seat. This city centre mound can be attempted from any direction and climbers are rewarded with stellar views.

Or how about a tour under the city? Blair Street Vaults present an underbelly of Edinburgh dating back to the 17th century.

It’s a short drive from the city centre to Leith, now home to the retired Royal Yacht Britannia. Named as one of the UK’s top tourist attractions, step on board for an audio tour that explores the history of its five regal decks. Afterwards, discover the Port of Leith, on the shores of the Firth of Forth. Dating back to the 14th century, it’s jam-packed with delis, chic bars, and top restaurants and one of Edinburgh’s most fashionable neighbourhoods.

Get out of the city in your Avis hire car, you’ll find mountains, lochs and sandy beaches waiting to be explored.

The Golf Coast
East Lothian is known as Scotland’s Golf Coast. Just 30-minutes’ drive from Edinburgh on the A1, you can practise your swing at any of the 22 courses along the 30 miles of stunning coastline, including Muirfield, North Berwick & Gullane.

Glasgow
Edinburgh’s lively big brother Glasgow is just over an hour’s drive away via the M8. Hit its Style Mile for designer stores and boutique oddities, or take tea with a side of shortbread at the renowned Willow Tea Rooms. From Glasgow, it’s a short jaunt east to the heritage site of Bannockburn and 16th-century Stirling Castle.

Other must-go’s: 21-arched Glenfinnan viaduct near Fort William (which plays a starring role in the Harry Potter films); the Grampian Mountains; the Cairngorm massif and the jagged west coast, that stretches all the way from Argyll to Wester Ross.

From Ullapool in Ross-shire, ferry out to the Outer Hebrides and into the windswept streets of Stornoway on the Isle of Lewis. An astonishing 150-mile round trip takes in standing stones, lochs and white sand beaches looking on to sparkling seas.

Whether you're moving house, doing a DIY project or getting the kids to the Uni, you'll find small, medium and large vans for hire in Edinburgh.

Avis vans are now available from a selection of hub locations across the UK.

Driving rules in the United Kingdom

Speed Limits
All speed signs will be in mph.

For a standard Avis rental vehicle with no trailers:

Unless indicated by road signs.

Please note - It is the child’s parent / guardian or vehicle renter’s responsibility to fit the child seat.